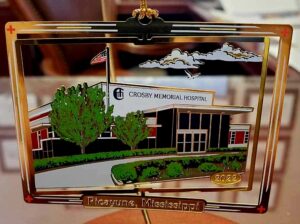 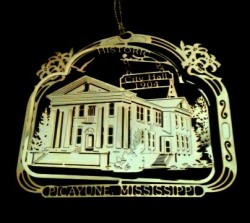 2000 Historic City Hall – The City of Picayune, Mississippi was incorporated in 1904. One of the oldest buildings is the City Hall which was built in 1939. The architect for this building was Mr. Wilfred S. Lockyer, who also designed the interior of the Chapel in the Titanic. At one time, this building housed the library, all city offices and the police and fire department. The name of Picayune came from the Spanish Coin worth 6 1/4 cents. 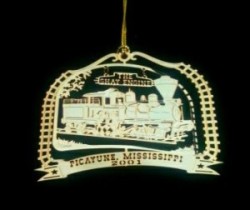 2001 Shay Engine – The Shay Engine, a wood burning locomotive, was built by Lima Locomotive Works in Schenectady, New York for Crosby Forest Products in 1925. Top speed was 19 mph and could pull a load as large as today’s freight trains. The Shay was used by Crosby Forest until the early 1960’s and was donated to the City of Picayune by L.O. Crosby Jr. 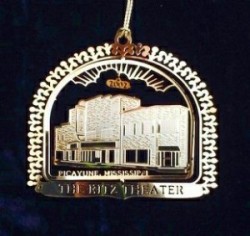 2002 Ritz Theater – The Ritz Theater, built in 1946 by W.L. “Pic” Moseley, was an active movie and community theater until its closure in 1977. For many years The Ritz was home to the “Pearl River County Hayride” which was broadcast live every Saturday morning over Radio Station WRJW. 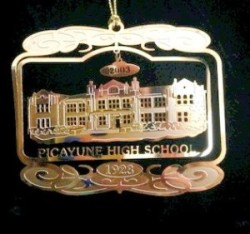 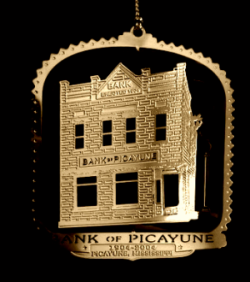 2004 Bank of Picayune – The Bank of Picayune building and services were built in 1904 by Eastman F. Tate. The brick building is on the corner of Canal and Highway 11. Although, it has another façade and covering, the original building is still there. Operation was sold in 1975 to the Hancock Bank. Hancock Bank operated banking business in this building until September 28, 2001. Present use is office space. 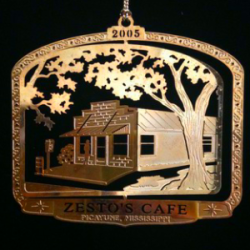 2005 Zesto’s Cafe’ – In 1956, Charles Lewis opened a small café at the end of West Canal Street. It was named Zesto’s and quickly became known for hamburgers, hotdogs, and homemade chili. A favorite place to gather, especially for the younger crowd and after school. Mr. Lewis became known as Zesto. ZESTO’s remained in business for approximately 30 years. The original building is still in place and houses a restaurant. Nothing can ever replace the memories that are in the building and hearts of many people. 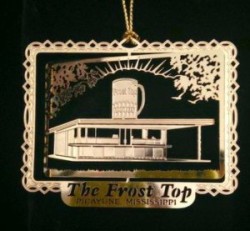 2006 Frost Top – In 1951, Odie Kemp built the Frost Top. Three years later he sold it to Leroy Sr. and Mary Kellar. Today, Tim and Dwayne Kellar are third generation Kellar owners. The mug on top was destroyed in 1969 by Hurricane Camille. The Frost Top is known for their homemade chili, roast beef poboys and of course the Lot-O-burger. 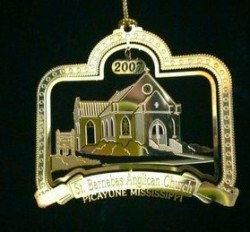 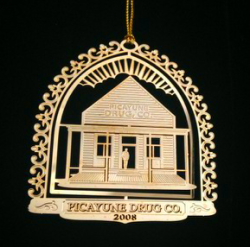 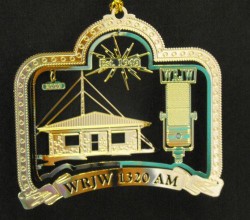 2009 WRJW – In 1949 the FCC granted the Mosely brothers a license to build and operate WRJW 1320 AM in Picayune, MS. Since it’s first broadcast day, on Saturday, November 26th, 1949, WRJW RADIO has strived to serve its listeners with timely local, state and national news, weather, local sports, and good country and southern gospel music. Since 1991, present owners John & Dot Pigott have continued the tradition of service to the community. 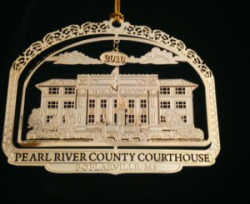 2010 Pearl River County Courthouse – Pearl River County Courthouse, was designed by P.J. Drouse in the style of Neoclassic Breaux Arts, and completed in 1920 during the term of Governor Theodore Bilbo. In 1926, the Daughters of the Confederacy dedicated a lawn monument to local Confederate and WWI Veterans and to the women of the South. Other monuments honoring veterans have since been added. 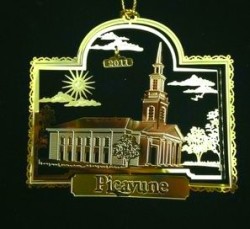 2011 First Baptist Church – Located on Goodyear Boulevard, First Baptist Church was designed by Fred Wagner and erected by Kellar Construction Company. The construction spanned from October 11, 1964 to September 11, 1966. Flanking the front entrance are six columns thirty-two feet tall and five feet in diameter. Each column contains 32,000 bricks with a center steel support. The spire, visible throughout much of the town, extends 186 feet from the ground to top of cross. The slate-roofed structure seats 1500 with a choir loft of 100. 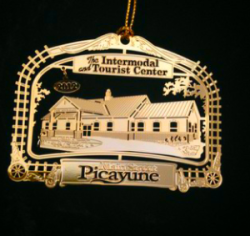 2012 Intermodal & Tourist Center – Also known at the “Depot” is located at 200 Hwy 11 South in the heart of downtown Picayune. Construction began in 2007 and completed in 2008. It was built with a Federal Transportation Association Grant. Ribbon cutting was held in October, 2008. Inside it holds the Lower Pearl River Valley Museum in which there are pictures and artifacts in which some date as far back as the 1800’s. There are also city offices for building and zoning permits, retirement development and tourism. The walls hold pictures of past and present city mayors, managers, police and fire chiefs as well as Picayune years ago to the present.

2013 is the Centennial Celebration at First United Methodist Church – Our present sanctuary was dedicated in 1956. We are the church on the corner of North Haugh & Fourth Street with Open hearts, Open minds, & Open doors. 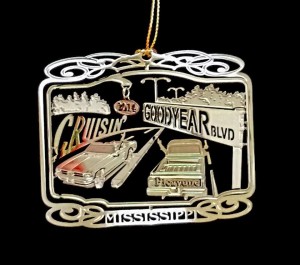 2014 Crusin’ Goodyear Blvd. – In the 1960’s Picayune was defined by Goodyear Boulevard in historic downtown, a magnificent four-lane drive in what was then a two-lane town. It became a rite of passage for all teenagers to cruise the boulevard, giving and collecting honks, parking alongside friend’s cars waving at the honkers,or participating in the ever popular drag racing. Nothing can ever take the place of the memories of cruising Goodyear Boulevard. Jim Luke/Doug McQueen. 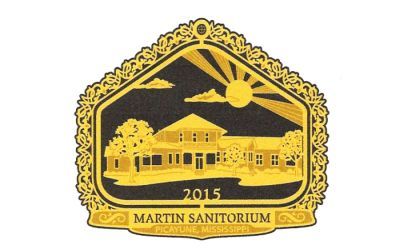 2015 Martin Sanatorium – Dr. John Van Buren Martin came to Picayune from Bogue Chitto, MS and opened Martin’s Sanatorium prior to 1928. Picayune City Council voted to subsidize a room in this early hospital as a charity ward in 1931, a vote of confidence in Dr. Martin’s abilities. Martin Sanatorium closed in 1953. Hancock Bank had an office there until 2012.  Mississippi Power purchased the property in 2013 and it is now home of their Customer Service Center. 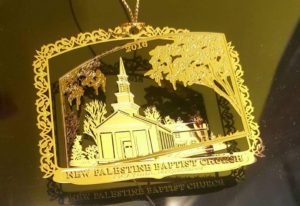 2016 New Palestine Baptist Church – was established in 1898 to serve as a light in the community to shine brightly the glory of God. Throughout the church’s storied history it has remained true to its mission to fulfill the Great Commission, found in Matthew 28:18-20. The church plans to accomplish this by lifting high the name of Jesus Christ, building up the body of Christ, and living sent out lives. The faith family of NPBC is determined to take the Gospel of Jesus to the nations, starting right here in Picayune, Mississippi. 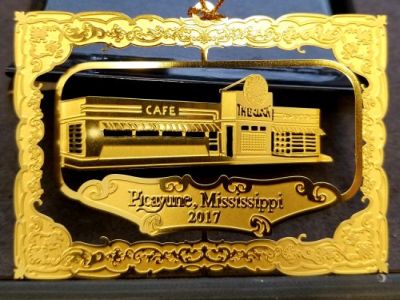 2017 The Clock – located on Highway 11 South in Picayune, MS was a service station, café and an ice house for more than 40 years. It was owned by Jonathan Payne (J.P.) Bilbo and his wife Josie (Jo) Toler Bilbo. The Café, with its friendly car hops did a booming business from the late 1950’s through the 1970’s.  Its streamlined glass and brick style was Art Deco influenced and popular in architecture from the late 1940’s. 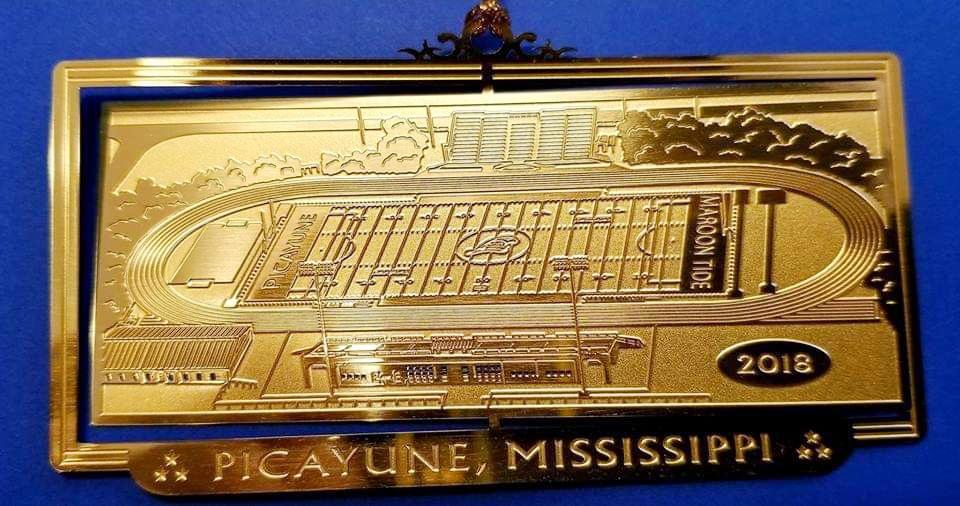 2018 Picayune Memorial High School Football Stadium– Picayune Memorial High School Football Stadium was formally dedicated on November 11, 1950, as part of a gigantic Armistice Day program and parade for the City. Coach Calvin Triplett served as the Grand Marshall. The stadium was dedicated to four former Maroon Tide Players who were killed in World War II. Robert W. Barnes, Raymond Goodwin, George Sebron Johnston and Charles Wilmon Stuart. The stadium, with a seating capacity of approximately 4,400 persons, houses a band hall, storage space, dressing rooms and private music room. Erection of the stadium was made possible by contributions from the Citizens of Picayune, Crosby Chemicals, Inc. and local industries. Artificial turf was installed at the stadium on April 14,2015. The name of the stadium was changed on August 23, 2016 to Lee/Triplett Stadium in honor of Coach Dodd Lee and Coach Calvin Triplett. 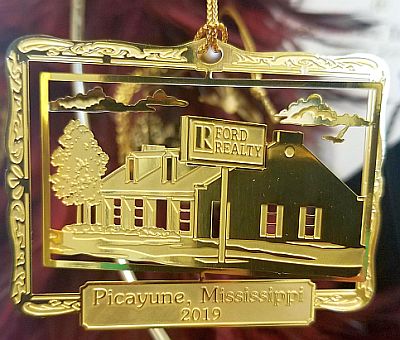 2019 Ford Realty – J.C. Ford established Ford Realty, Inc. in 1949 after selling the Ford Hotel. His first office was in the Picayune Drugstore Building. When Glen Ford returned from the Army, he joined his father in the real estate business. J.C. Ford retired in approximately 1979 and Glen took over the business. Ford Realty moved in 1984 to the location on Memorial Boulevard where they still are today. Martha Ford received her Real Estate license in 1984 where she and her Dad worked together before his retirement in 2012. Martha is now the owner and broker. We are three generations proud. 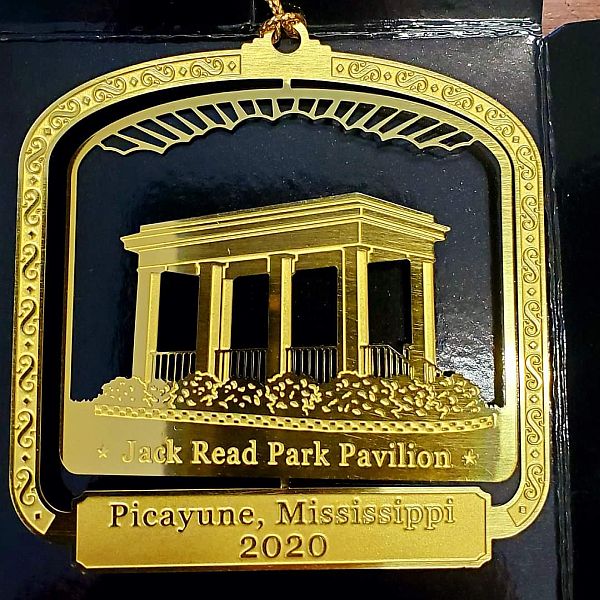 Architect Fred Wagner designed the Pavilon at Jack Read Park located at 200 Goodyear Blvd. The pavilion was completed in 1991 & dedicated in honor of longtime City Manager, Jack Read. In 2010, a 0.15 Mile loop Walking Trail is on outer boundary of park and brick paver sidewalk with city logo was added. 2019 the pavilion was refurbished. Wagner’s principal work in Picayune were the Pavilion at Jack Read Park, First Baptist Church of Picayune and Saint Paul Episcopal Church. 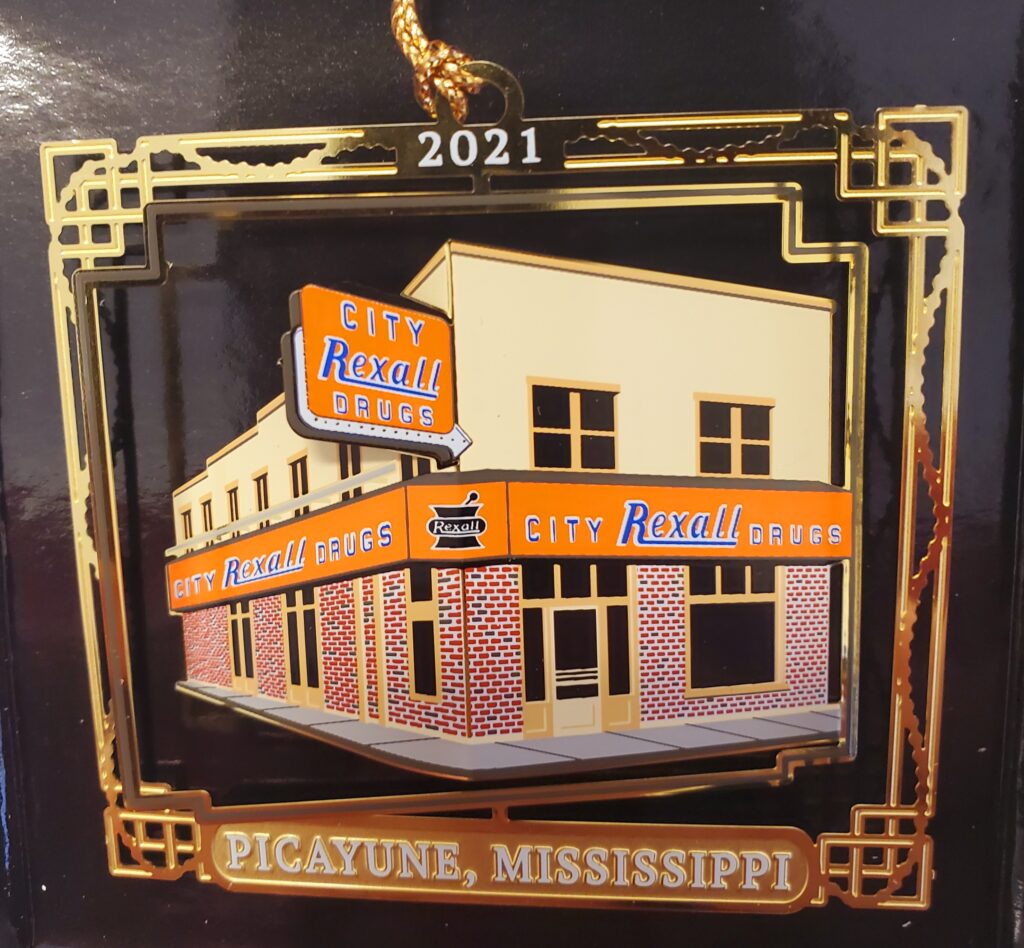 Established around 1905 by Mr. Stovall. When he passed his wife was in search for someone to run the business. Shortly after WW2 Benjamin O. Griffin was looking to open his own pharmacy. Griffin moved to Picayune in 1946 to run City Drug Store and purchased the company in 1947. In the 1950’s, it became a Rexall franchise store. Mr. Griffin continued to improve and modernize the pharmacy.  He moved the drug store to the Picayune shopping center on the corner of Elizabeth Street and West Canal in 1965.  In February 1985, Ben Griffin passed away.  May 1985, his son John moved home to help his mother at City Rexall. City Rexall relocated to 349 South Mainstreet in 2006 following damages that occurred from Hurricane Katrina.

On December 12,1949, the City of Picayune began to explore the options available for establishing a community hospital. The city withdrew from the project on October 2, 1951, beginning a complicated series of power shifts from city to hospital board involving a succession of city and board officials. A true community endeavor – building was accomplished with state funds, worker donations collected from Crosby Chemical and from a generous donation from the Ethel Crosby Foundation. The firm of Noah Webster Overstreet designed the building which was placed on Goodyear Boulevard. As a result of the Ethel Crosby Foundation donation, the hospital was called Lucius Olen Crosby Memorial Hospital before it was acquired by Forrest General of Hattiesburg and renamed. The building was demolished in 2013 and the land is now used for a park space with an event venue. 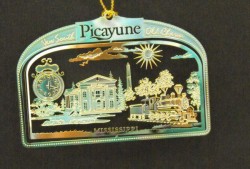 Picayune City Ornament $15.00  – Residents take pride in our city motto “A precious coin in the purse of the South.” Picayune was named in roundabout way for a Spanish coin. Miss Eliza Jane Poitevant, who lived n Picayune in the 1800’s, was literary editor of the Daily Picayune a New Orleans newspaper which sold for ‘one picayune’ a Spanish coin worth 6 ¼ cents. Miss Poitevant married the publisher of that newspaper, which is now known as the Times Picayune. Either through her influence, or out of admiration for her, the City of Picayune was given its present name in honor of her and the newspaper. The city was originally chartered in 1904.